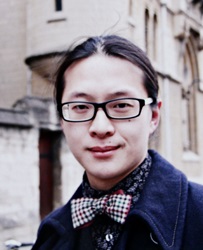 Jonathan Jong completed his doctorate at the Department of Psychology, University of Otago, New Zealand in 2012, specializing in the role of death anxiety in religious belief. He then joined the Institute of Cognitive and Evolutionary Anthropology, University of Oxford, working on two large projects—Ritual, Community, and Conflict and Religion’s Impact on Human Life—on the social causes and consequences of religion and ritual. He came to Coventry University in 2015, and is Deputy Director of the Brain, Belief and Behaviour group at the Centre for Psychology, Behaviour and Achievement. His book, Death Anxiety and Religious Belief (with Jamin Halberstadt) is now available from Bloomsbury, Amazon, and elsewhere.

My research interests are unapologietically anthropocentric. After all, human beings are endlessly fascinating. We worship gods, and build cathedrals to them. We hold strong moral beliefs, and construct complicated systems of reward and punishment to govern them. We fall in love; and out of love. We laugh at jokes, as well as in inappropriate occasions. And we do so much more. But why? What motivates human behaviour? How do evolutionary forces and cultural contexts shape us today? These are the sorts of questions that occupy my days, and sometimes keep me up at night. My research is driven by a curiosity about why human beings do the curious and amazing things we do.

Beyond Buddhism and animism: A psychometric test of the structure of Burmese Theravada Buddhism

Death salience moderates the effect of trauma on religiosity

Wounds and Injuries
Religion
Parturition
Health
Research
Your message has successfully been sent.
Your message was not sent due to an error.
If you made any changes in Pure these will be visible here soon.