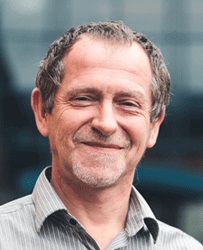 Prior to joining Coventry University in 2015 Chris Shannahan was the head of Religious Education in a large East London Secondary school; a youth worker in the East End of London and Trenchtown, Jamaica; a Methodist Minister in inner-city London and Birmingham and a community organiser. This grassroots experience provided the grounding for his research in urban theology, sociology of religion and diversity studies and the basis of his PhD, within which he developed the first critical analysis of urban theology in the UK (2008, University of Birmingham). On completing his doctorate he became a Postdoctoral Research Fellow and then a Teaching Fellow at the University of Birmingham (2009-2012) where he developed a major ethnographic project working alongside unemployed young men on a large Birmingham housing estate and pioneered the teaching of urban theology and political theology. In 2013 he moved to the University of Manchester to take up the position of Lecturer in Religions and Theology where he taught courses on Political Theology, Urban Theology, Myth, the Study of Religion and Introducing Christian Theology. Alongside his research into Chrisitian action on poverty, Theology and Racism and faith-based political activism he is currently developing a cross-cultural and interfaith contextual theology project entitled the 'Faith and Peaceful Relations Forum' and is the coordinator of research on intercultural dialogue and diversity at the Centre for Trust, Peace and Social Relations. You can find out more about his current research on Twitter at @ChrisShannahan.

His first monograph, Voices from the Borderland (2010) was described as a ‘ground-breaking’ example of cross-cultural urban theology and is a set text at Universities and Theological Colleges in the UK, the USA and Australia. His second monograph, A Theology of Community Organizing (2014) provided the first systematic theological analysis of broad-based community organising. His research utilises Hip-Hop culture, as seen in his 2012 partnership with the street artist Mohammed ‘aerosol’ Ali on Chris's ‘Bromford Dreams – Graffiti Spiritualities’ action research project. At present he is working on his third book, provisionally entitled 'Christianity, 'Race' and the Politics of Faith'.

His 'Schools Linking and Social Cohesion' action-research project, which was funded by the Ministry for Housing, Communities and Local Government focused on the Schools Linking National Programme run by The Linking Network, which is committed to fostering greater understanding of other cultures and religions amongst school-children across England as a means of fostering social cohesion.

He is the Principal Investigator on a major three year urban theology project 'Life on the Breadline - Christianity, Politics and Poverty in the 21st century city' [2018-2021] which is funded by the Economic and Social Research Council. In this project Shannahan, his two CO-Is - Professor Robert Beckford and Professor Peter Scott and Research Associate, Dr Stephanie Denning is analysing the nature, scope and impact of Christian engagement with urban poverty in the UK since the 2008 financial crash. Based around 6 original ethnographic case studies and more than 100 interviews the project represents the first evidence-based academic theological analysis of poverty in the UK in an 'age of austerity'. You can keep up to date on Twitter using the hashtag #BreadlineResearch. His most recent paper, 'The violence of poverty: Theology and activism in an Age of Austerity' (Political Theology) introduces a number of the key themes that the project will explore.

Chris is the Director of Postgraduate Taught Programmes at the Centre for Trust, Peace and Social Relations. You can find out more about CTPSR's Masters Courses here.

My research focuses on the relationship between social exclusion, the life of multicultural cities and urban political theology. My approach to research reflects the vision articulated by Cornel West who suggests that academics are called to ‘shine a light on the social misery that dominant forces within society often keep hidden.’ My work alongside young gang members in Trenchtown Jamaica, HIV+ homeless people in San Francisco, unemployed young men on urban housing estates, inter-faith community organising networks and British-Muslim youth in inner city Birmingham has reflected a fundamental commitment to research and teaching for progressive social change. You can find out more about my work by visiting my Blog, Finding Faith in an Urban World.

The Violence of Poverty: Theology and Activism in an 'Age of Austerity'

Voices from the Borderland: Re-imagining Cross-Cultural Urban Theology in the 21st Century,

A Theology of Community Organizing: Power to the people

Life on the Breadline: Christianity, Poverty and Politics in the 21st century

Life on the Breadline - The Unequal Impact of Austerity

Society for the Study of Theology

Christian action on UK poverty in an 'age of austerity'

Academics to analyse link between Christian theology and poverty activism in UK, The Church Times